Someone once worked out that if you’d followed Alex Salmond’s recommendations over the years when he was The Scotsman’s racing tipster, you would have lost £3,000.

As he launched his new Alba Party ahead of May’s Holyrood election, I wonder if the former First Minister thought for a second or two about the odds that his actions may have made his lifelong dream of Scottish independence less likely?

If he did, he clearly came to the conclusion that it was a gamble worth taking.

In his political life, the former First Minister has always been something of a risk taker and in the main those risks invariably paid off. Under his leadership, the SNP went from a position where they weren’t much more than a minor irritant to the main UK parties to being in the seat of power in the Scottish Government and staying there.

It’s 14 years since Salmond swooped into Edinburgh on the back of a surprise election win and with his then deputy Nicola Sturgeon, formed a minority government. Four years later, he did the impossible and achieved a majority, something even his closest aides admit they didn’t really consider right up until the moment it happened.

The gamble that didn’t pay of course was the independence referendum in 2014. While the independence movement nearly made it, it wasn’t enough and after defeat, Salmond quit as FM handing the reins to his protégé Sturgeon. It was a seamless transition that led to another SNP win in the 2016 Holyrood elections and a renewed drive for a second independence vote.

It was just about a year later that allegations about Salmond’s conduct emerged and his relationship with Sturgeon began to falter. From the moment he was acquitted at the High Court last March, it was always going to come to this.

The Alba Party – actually the Alex Party – wants an “independence supermajority” which sounds much better than a majority but means the same thing.

The aim is to maximise the independence vote by giving those who aren’t happy with the SNP’s approach a new outlet. And by standing in the regional lists only, he can claim he’s not out to damage the independence movement by leaving the constituency vote to his former colleagues in the SNP.

Sounds simple but what odds would Salmond give himself on achieving that aim?

Firstly there’s the potential toxicity of his own brand poisoning the nationalist well. Polls earlier this year suggested he is less popular in Scotland than the UK Prime Minister. As he said repeatedly at his launch, he’s been acquitted by a jury of some very serious charges but as he said himself, he was “no saint”.

How will that go down with the independence supporting electorate especially when his actions are damaging the female leader and the party he led for so long?

And then there’s the question of how well the Alba Party might do. Until we see some polling nobody can tell, but the scale of their challenge becomes clear with some rough calculations based on the 2016 results.

Under the Holyrood voting system Alba would need a minimum of 5–6% of the vote in most regions to win a parliamentary seat. That’s about 30,000 voters for example in Glasgow the same as the Scottish Conservatives achieved in the City last time and just over a quarter of the SNP’s Glasgow vote .

Nationally, the SNP secured almost 1 million list votes across Scotland in 2016 – could Alba realistically grab over 250,000 votes and win multiple seats across the country having launched just six weeks before the election?

While Salmond is a well-known national figure, he is standing in the North East, his former electoral stronghold, but just who will be on the other lists and how credible will they be?

And finally there’s the question of what happens if they do actually do well. Say they get a few MSPs. If the SNP doesn’t have a majority, will they link with Alba to try and form a majority?

Salmond says his new party won’t be part of the Government so probably not and the Greens have traditionally been in that position and it’s hard to see how a mix of all three, who support independence, could be reconciled to work together.

Maybe that won’t matter because it has created an independence majority in the Holyrood chamber. But imagine the scene if Nicola Sturgeon’s referendum bill could only get through because of support from the party led by her bête noire.

So if you’re against separation, this is all good news? Not necessarily. The independence support cake isn’t necessarily smaller; it’s just there are more slices and they all taste a bit different.

Despite the rather amateur nature of Alba’s launch, you would be foolish to dismiss Salmond as yesterday’s man. He’s come back before – twice at least – and the cocky confidence that has permeated his political career remains undimmed. There might even be a few Westminster SNPs who might be attracted to move over to his new party.

New parties traditionally find it hard to do well in big elections. Alba launches with less than 6 short weeks until the election and at the launch, there were only a hundred or so tuning in at the start. Come election day, much of the country might not even realise they exist.

But in any case, a new independence vote isn’t easy to achieve however the first step has to be legislation in the Scottish Parliament and for that, separatists need a majority.

The SNP is still likely to win the largest number of seats because while the Scottish Government’s track record at Holyrood isn’t great and failures in health and education alone would be damaging enough for any other party, the SNP has a vaccine that inoculates it from the kind of damage that can prove fatal to other parties– independence.

As long as the that remains a realistic prospect, maybe nothing else matters to the movement. But if it comes down to relying on a booster jab from Alex Salmond’s new party to give the independence vote that final push, could Nicola Sturgeon really just hold her nose and take the medicine? 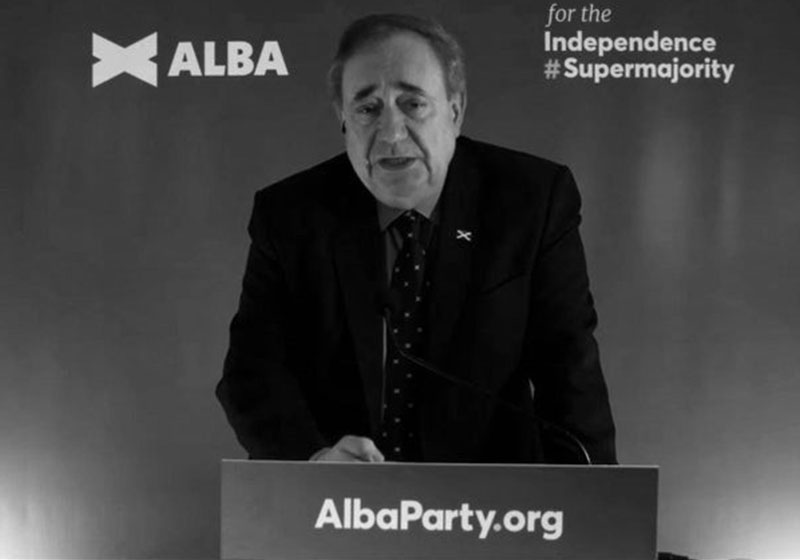