COP or flop? Creating the climate for change

I was not even a twinkle in my mother’s eye when the first Conference of Parties (COP) met in 1995.

In December of 1997, the year before I was born, COP3 established the Kyoto protocol committing industrialised countries to reduce greenhouse gases to 5.2% of 1990 levels by 2012. Eighteen COPS later, I was finishing secondary school when the Paris Agreement pledged countries to aim for no more than the familiar 1.5 degrees of warming. And now, still failing to reach these targets, the Prime Minister stood on stage last week at the opening of COP26 to announce we are “minutes to midnight” for the doomsday climate scenario (before private jetting off to party with a climate sceptic) and I, now at 23, am sat wondering if any of this will ever make a real difference.

It seems I am not alone. Key leaders within the UN conceded that COP26 would not achieve what it needed to before it even began. And core news outlets have lambasted the conference’s hypocrisy and virtue signalling since its opening. It’s now the final scheduled day for Glasgow’s conference, after two weeks of negotiations the goalposts have conveniently shifted to 1.8 degrees, and still major decisions surrounding climate finance and carbon markets are yet to be resolved. The Swedish activist Greta Thunberg has been quoted saying that COP26’s main goal has simply been to “maintain the status quo” and that the diplomatic conference “turned into a PR event”. And she may be right: more fossil fuel representatives having attended COP26 than delegates from any single country. And its main sponsors — SSE, Scottish Power, Sky, Sainsbury’s, Unilever, NatWest, National Grid, Microsoft, Hitachi, Reckitt, and GlaxoSmithKline — produced a mass of 326.1 million tonnes of C0₂ last year alone. That is not to question their motivation or efforts to tackle these issues, but you can see why Greta feels the way she does.

You only need to check social media, the news or even walk down the street to see that climate anxiety is running at an all-time high. A key shared feeling is that nice words and false promises no longer mean anything. Especially when these words are coming from those who have gained the most from climate destruction — cue Jefferey Bezos claiming his extravagant trip to space made him realise “how fragile” the planet is — thanks Jeff, we’re all very glad you’ve grown and can continue to make billions of profits from that experience.

Meanwhile, despite the UK Government boasting that COP26 would be the most inclusive yet, two thirds of charitable organisations planning to send delegates could not due to lack of vaccine access, travel costs, and the UK’s immigration system. And the online platform created to even the balance of participation faced its own myriad of technical difficulties.

With up to 100,000 protesting in Glasgow last weekend and phrases such as ‘no more blah blah blah’ becoming keynotes of public sentiment for this COP, the time for words has clearly passed.

Sociologist and energy demand specialist Elizabeth Shove has spent a large part of her career figuring out why there is such a gulf between knowledge and action when it comes to public climate behaviour. Researchers like her have found that no matter the messaging surrounding climate change, the response — whether through fear, guilt, lack of resources, or loss of faith — can often be inaction.

Various models have been suggested to combat this, firstly the provision of clear instruction and call to action following a climate messaging. But most importantly, systematic policy changes that nudge the population towards the right behaviours — such as the sugar levy discouraging fizzy drinks, or the 10p charge on plastic bags. Low carbon options need to be incentivised and high carbon options made unappealing. Changing the ‘choice environment’ to provide more sustainable options and less carbon intensive items (eg. vegetables vs meat) can do this, as well as taxing high carbon activities *cough cough* domestic flights *cough cough*, and providing subsidies for green infrastructure like heat pumps or electric vehicle tech.

These suggestions show how individual inaction is affected by poor messaging and incentivised by shifts in the landscape of options — COP perhaps presents a macro version of this.

As the American Architect Buckminster Fuller once said, “you never change things by fighting the existing reality. To change something, build a new model that makes the existing one obsolete”. With hosting politicians still attached to developments such as the Cambo Oil Fields off the coast of the Northeast of Scotland, and sponsor organisations relying on offsetting rather than systemic change to meet their targets, it seems our most influential actors have been hoping a business as usual with a glossy green sheen approach could muddle them through these negotiations.

Ultimately, COP’s should be focussing on one thing: halting the burning of fossil fuels. Instead of fixating on words or fragile future targets such as net zero by 2050, representatives should look to de-trench systems from carbon reliance. Of course, global negotiations are daunting, but perhaps taking a smaller lens and seeing what influences individual change could help. Levy high carbon multinational corporations, divest from fossil fuels and invest in making green energy cheaper and more widely available, change the ‘choice environment’ of influencers within these debates to de-platform polluters, and give representation to those most effected. All these examples are in a sense, sized up versions of your supermarket five-a-day vegetable promotions.

But instead of the government telling us to eat more bananas, the shoe is on the other foot. As we have watched — some of us our whole lives — COPs meet and negotiate to achieve little change, it’s tempting to agree there is no benefit at all. But one good thing has come out of these conferences: we have the opportunity to criticise. COP shines a light on the climate crisis and what is being, or more importantly, not being done. So as this event comes to an end, let’s keep challenging our governments, companies, and leaders to lead by example and eat their vegetables. 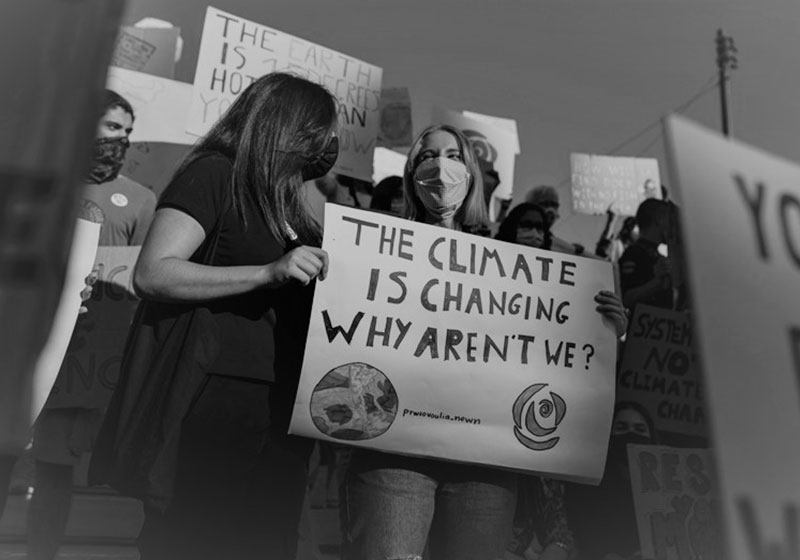