Friday is the new Saturday: the Scottish Government’s answer to the ‘new normal’?

Not one aspect of our day-to-day lives has been left untouched by emergence of Covid-19 and the subsequent restrictions implemented to curb its grip on society. In the early days of the pandemic, trips to the supermarket became mission critical as we scoured shelves for the last remnants of toilet roll, flour, and other precious commodities. Children were expected to …

Not one aspect of our day-to-day lives has been left untouched by emergence of Covid-19 and the subsequent restrictions implemented to curb its grip on society. In the early days of the pandemic, trips to the supermarket became mission critical as we scoured shelves for the last remnants of toilet roll, flour, and other precious commodities. Children were expected to be home schooled and our favourite cafes, restaurants and bars were closed indefinitely. Restrictions weren’t just limited to our personal lives however with the mass and rapid increase of home working blurring the lines between work and home lives.

The results have highlighted a strain of overwork, stress, and burnout in the British workforce. And as the vaccine roll out offers hope and we settle into the long forecasted ‘new normal’, the Scottish Government has confirmed it plans to pilot a four-day working week as the answer.

But is it the right answer? Maybe. A recent IPPR survey showed, 88% of people agree with the idea of a four day working week and there is some evidence that a three-day weekend could vastly improve employee wellbeing with more time to pursue hobbies and carry out caring duties. This was exhibited in Iceland following a trial of the equivalent of a four day working week from 2015 to 2019. Various workers, employed in industries such as social services and hospitals, moved from a 40-hour week to a 35 or 36-hour week. Workers reported feeling less likely to suffer from burnout and were significantly less stressed.

The result of this is that 86% of Iceland’s workforce have either moved to shorter hours for the same pay or will gain the right to do so.

London-based multinational, Unilever trialled a similar scheme in New Zealand which produced similar results including a 20% increase in productivity.

But will this success echo in the Scotland? In 2019, people living in the UK worked 84 minutes more per week on average than other EU countries, according to Eurostat. Coincidentally, in 2018/19 stress, depression and anxiety accounted for 54% of all working days lost due to ill health. Workload was estimated to have caused 44% of all work-related stress, anxiety, and depression. The UK is clearly in need of a solution to this problem and thinks tanks Autonomy and Compass believe a four-day working week could be it.

They advocate that there is a need to protect workers at the very heart of the British economy from working practices that could impact on their mental wellbeing. Working from home has resulted in people working more hours, not less. And as the IPPR showed, there’s overwhelming support for it from employees.

But employee wellbeing and increase in productivity are not the only assumed benefits for companies with environmental benefits and lower operational costs also predicted.

Campaign group, 4-day week, has even suggested that reducing the UK’s working week by one day could cut the country’s carbon footprint by 127 million tonnes per year — the equivalent of removing 27 million cars from the road.

So why aren’t we jumping at this opportunity?

A central argument to the adoption of a four-day working week is that it would boost productivity but clearly this is not guaranteed and may be a gamble for business. Companies are likely to be concerned whether individuals can evolve and adapt their working practices to fit within the shorter week. Investments to implement such a cultural change may not easily bear fruit and prove a headache for employers. And it is increasingly difficult to measure and monitor with more of us working from home or flexibly.

Furthermore, managing stakeholder relationships when you are in a role that requires you to be readily available to answer any pressing questions could present challenges and it may appear that a business that has its staff working a condensed week could have less ability to deliver at an equal level to a business where people work five days. This is especially true of service-led industries, where customers can expect an instant response.

Workplace culture and management style is likely to be crucial to a successful four-day working week. Workplaces that are trialling shortened working weeks have also invested in high-quality management who can provide the support required to effectively implement the new structure. A four-day work week will not improve the wellbeing of workers if the business doesn’t have the infrastructure required to allow it to be successful.

There are also several unanswered questions relating to workers on hourly contracts or other flexible working. Retail and hospitality are two of the industries hardest hit by Covid, and yet how can it and its employees survive to benefit from a drop off of one day’s work without loss of pay? Any trial of reduced working hours may need to be inclusive of all types of work, not just office based, nine-to-five jobs. And it means an evaluation into what this looks like for shift and part-time workers. Will the £10 million funding be enough to do this?

Even if the pilot is successful, there remain considerable questions to be answered before it could become reality. That said, the working culture and environment has changed radically over the past two years. Maybe the ‘new normal’ is that we could find ourselves relaxing at our favourite pub at 2pm every Friday. 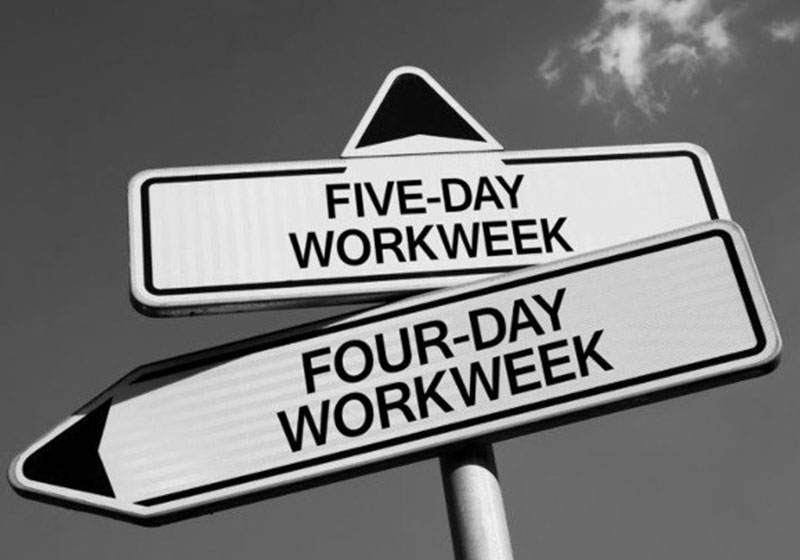