Door-stopper prospectuses, flashy slide decks, a phalanx of bankers, lawyers and cast-of-thousands advisers, they are (or at least should be) the ultimate exercise in expectation management.

You need to generate enough of a buzz to secure everyone’s confidence but leave the real excitement until you’ve got the IPO ‘away’.

For management teams IPOs are tiring, intense and exhilarating.

Very little compares to the experience of being on the stock exchange balcony – with nowhere to hide – waiting to see your company trade for the first time, hoping above hope that investors share your dream.

Exactly as it was for the team at a takeaway delivery firm / Britain’s most successful tech firm* that made its debut on the stock exchange this week. *delete as you see fit

At the end of its first day of conditional trading Deliveroo, the celebrated Amazon-backed start-up that whisks the nation’s favourite takeaways to our front doors on its fleet of eponymous bikes and scooters, was valued at £5.6 billion.

In any normal situation you’d imagine the champagne corks were popping at Deliveroo HQ.

Through the fog of pre-IPO hype – including feverish valuation speculation and the backdrop of an excitable push to make London a new global hub for founders wanting to IPO their tech start-up – Deliveroo emerged punch drunk, looking like they’d lost a tenner, and found a pound.

Their IPO day will, seemingly, go down as a bit of a washout. A complete and utter Flopperoo as the city wags sniggered under their breath.

In the first day of trading, more than £2bn was wiped off an opening valuation that was at the very bottom of an already reduced price range.

Losses weren’t limited to big institutional investors either – customers had been encouraged to participate, putting in £50m of their money to the firm (nursing a paper loss of £12.5m on IPO day).

Instead of standing on the Stock Exchange balcony celebrating having built a £5bn company from nothing in under a decade, management were on full show to the markets*, applauding and looking happy as the share price tanked right in front of their eyes… looking like it wouldn’t stop.

*or so we thought, as it turns out the whole thing was pre-recorded

How could so much reputational damage be done by the very process that has confirmed the huge value that’s been created in your company?

The whole affair has left a sour taste for many including the Government, backing London to become host to more big tech flotations and make the City an attractive market for founders of high-growth firms looking to raise capital.

As the pre-IPO hype machine was in full flow the Chancellor was even lined up to hail Deliveroo as a great British success story heaping praise on management for choosing London.

Speaking to the FT, one banker called it an “absolute car crash”. “It’s completely embarrassing. I can’t remember a time this has happened before,” he was reporting as saying, adding that the IPO was “disastrous” for London’s hopes to become a focus for tech listings.

Cue the perfect storm where a city story rises to the top of the BBC News front page and splashed with much excitement across the usually sober business pages.

No doubt Deliveroo’s IPO will be an MBA case study for years to come.

The (anonymous) explanations from those involved on what may have gone wrong have already started flowing thick and fast – global market volatility”, “peers trading down” and “hedge funds going short”.

Classics of the ‘Not my fault, guv’nor.’ genre.

But market experts were quick to point out a whole host of factors the firm would have been well aware of, well before the IPO.

Scepticism of the business model (especially post lockdown, when maybe we’ll stop gorging on takeaways). A whole host of unanswered questions over corporate governance, workers’ rights and commission fees. Not to mention growing antagonism among institutional investors about the Government’s push for dual-share structures that Deliveroo were taking full advantage of.

If all that was known, why did things get away from Deliveroo and their advisers on the day?

The drive to deliver one of the biggest UK IPO in years created a runaway narrative around a supposed blockbuster valuation, where people were expecting a mega IPO.

Others, keen to build it up as a poster-child for London as a thrusting, thriving home for the world’s tech founders to IPO their companies, blew the pre-float hype bubble up to the point where it was ready to burst.

By IPO day it all became pretty black & white.

Anything other than hitting the top of the price range was always going to be seen as some kind of ‘failure’ – especially in the sceptical, knock-em-while-they’re-down London market.

So despite having just floated a tech start up for a whopping £5 billion, there was only going to be one outcome after a 30% drop on opening morning.

It’d be all too easy to see this as a simple fact of the IPO being priced wrong.

That did seem to happen.

But the more important reason Deliveroo’s IPO will be remembered for all the wrong reasons was the fact the company lost control of the narrative around the IPO.

A swirling whirlpool of giddy excitement about specific valuations left no space for the firm to properly explain why there is so much value in the business or give investors confidence around all the other big questions being asked about the firm.

It’s all too easy for this to happen in IPOs. The army of people involved makes controlling the message and being disciplined about building a consistent and credible narrative incredibly difficult.

One part of the communications – such as valuations – can quickly come to dominate the messaging and crowd out all other topics.

With Deliveroo, where were the solid – less excitable – communications landing strategic messages on how the firm had addressed some of the key questions about the firm?

Where was the evidence the company had listened to investors’ key questions being asked on the roadshow, or a demonstration of how the company planned to set a gold standard in corporate governance, alongside its dual-class share structure – the strategy to address potential cynics and avoid people going ‘off-side’?

Perhaps the company felt all these things were in place and were working.

Perhaps everyone felt expectations on valuation were achievable and that their dream was so strong that the wider story about the company’s value (and values) were somehow less important.

That’s where good communications are not just vital, but are as important as any other advice, maybe even more so in high profile floats like Deliveroo’s.

Whatever happened, the cost for one of Britain’s most successful tech firms of losing control of the narrative – and people’s exectations – has been immense.

Many people shared Deliveroo’s dream – and still do.

Why not, it’s a great company that could well go on to have real global success.

But the failure to manage expectations will leave an indelible mark on the firm that few will forget and should be a cautionary tale for others coming to the market for years to come. 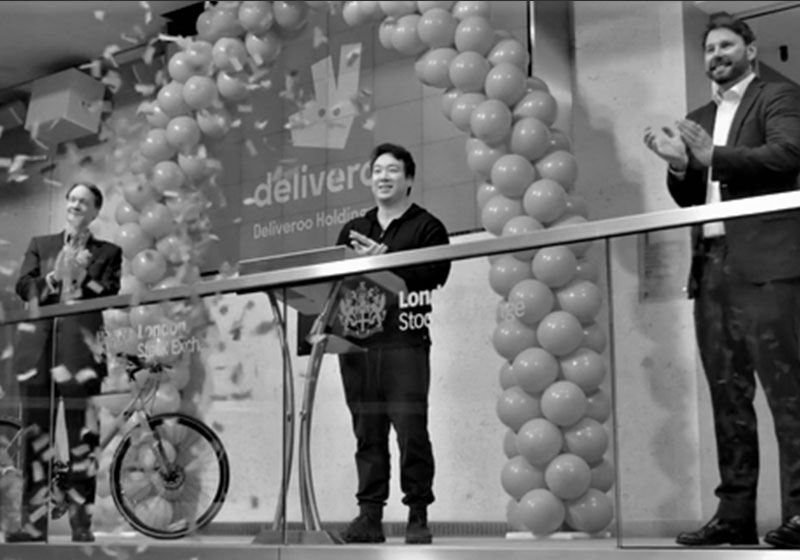