The united states of the unions

It’s the life of a democratic political leader that one day you’re in Washington DC basking in the glow of praise from one of the United States’ most senior leaders and the next you’re back home and on the hook for the cancellation of the 18.44 Scotrail service to Markinch.

It’s pretty unlikely that the lack of train drivers on the Fife Circle on a Thursday evening came up when First Minister Nicola Sturgeon met House Speaker Nancy Pelosi in the Capitol building. The union they would have discussed was the one the FM wants to see the back of not ASLEF the train drivers’ union whose dispute over pay means weeks of cancellations ahead for newly nationalised Scotrail. Come to think of it, she may want to see the back of that union as well.

Escaping domestic woes, such as those cancelled trains and a couple delayed new ferries, would have been an attractive aspect of the FM’s flying visit to the United States. It was marketed as a chance to highlight investment opportunities in Scotland and strengthen relations between the two countries. In reality, it was an opportunity to boost the credentials of a future independent Scotland, and the FM, as a positive, international player.

Did it work? Her carefully chosen topics sought to place Scotland front and centre of the global move to net zero, re-assure the US about an independent Scotland’s role in security of the West, and probably build some momentum for a new independence referendum back home. On the first two, positive sentiment suggests some success but as for the latter, it’s far too early to tell.

It was Sturgeon’s first visit to the US since 2019 but making these international trips has long been an integral part of any SNP FM’s agenda as they seek to portray Scotland as an outward looking, collaborative partner of nations despite their desire for separation within the UK. Indeed in an interview the FM suggested separation was the wrong word to use and that by being an independent country, Scotland could play a greater part across the world. It echoed similar language used by Brexiteers in 2016, a comparison she would not thank you for.

The trip included a speech at the Brookings Institute and that meeting with Nancy Pelosi, who was gushing in her praise of the FM, but the other meetings were with backbench members of congress. And while she did meet with US Deputy Secretary of State Wendy Shenkin, the Scottish Government read out said they’d discussed Scotland’s constitutional future while the State Department said only that they’d talked about Ukraine.

The reality for the FM is that with the constitutional debate on Scotland firmly stuck in the slow lane and an immediate referendum not on the cards, it remains hard, in international terms, to get a seat at the top table. Foreign affairs is reserved to Westminster and it was reported that officials from the Foreign Office attended the Shenkin meeting.

Her hosts would have been aware that since the 2014 referendum delivered a decisive ‘No’ vote, the UK Government has shown no signs of fully engaging on or even just discussing the prospect of another independence referendum whereas it’s the main plank of the programme on which the SNP was elected to govern Scotland just last year.

But the SNP, emboldened by the continuing unpopularity of the Tory party in the polls and the Nationalists’ incredible run of success in Scottish national and local elections – 11 and counting – is sticking firmly to the script that a new vote is a ‘must’ either this year or next. And to back it up, they are said to be well into the process of producing a series of White Papers which will show how they believe an independent Scotland might work.

New pressure in Northern Ireland following Sinn Fein’s success at the recent assembly elections has also fuelled hope among some in the SNP that a wider state of constitutional flux across the UK plays into their hands but the truth remains; they do not currently have the ability hold a new vote without UK Government approval and may have to use a legal challenge to try to force one. And not only that, current polling suggests the outcome of any vote would be too close to call.

On the US stage, however, the FM had no need to worry about such trivialities. This was an opportunity to present Scotland as ‘nation in waiting’ and by focusing on climate change in her speech to Brookings, link back to Scotland “hosting” the world at COP26 in Glasgow last November. Although the actual host of COP26 was the UK Government, the FM was omnipresent throughout.

The speech clearly signalled her determination to move even faster on using more renewable energy sources despite the current pressure on global energy supplies. Scotland is on course to double offshore wind generation and plans to increase onshore capability significantly. And a nation whose industrial strength was largely built on the stuff will have no power generated from coal by 2025. The FM said that “having led the world into the industrial age”, Scotland now has an obligation “to play a full part in helping the world move into the net zero age”.

Bold words perhaps for a nation that’s not fully in control of its own destiny but it’s a key part of her own ambitions. Her party governs with two Scottish Green ministers in Cabinet even though she already had their party’s support in Parliament. That seemed to be more about portraying her government as ‘progressive’ and green, European even. And is a stark contrast from the days under her predecessor when the SNP’s economic case for independence was built on mountains of money from North Sea oil and gas.

Interestingly, she might be on the same page on this as her hated foes in No10. The Tories are said to be finding that partly because of rising fuel costs, voters are warming to the idea of net zero helping create a better mix of energy supply especially if it leads to lower bills in the long term.

Turning to events in Ukraine, the FM said it had strengthened her conviction that being part of NATO was the right thing to do. In another sign of the strange nature of their co-operation agreement with the Scottish Greens, as she was saying this, their co-leader was re-affirming his party’s stance against Scotland being part of NATO.

The NATO commitment may have been welcomed by her American hosts but they have concerns about the impact a separate Scottish state could have on aspects of Western alliance. One of the West’s most strategically important nuclear submarine bases is on the Clyde in the West of Scotland and there are very few options to locate it safely elsewhere. The SNP’s commitment to a nuclear free independent Scotland causes concern in the State Department but there was no indication that came up during the meeting with the SoS.

The challenge for the FM is much of her approach seems to paint her into a corner and sits at odds with playing a key part in the West’s response to Russian aggression. The green commitment, for example, may echo a common view but the necessity of disengaging from Russian energy supplies for the West means some uncomfortable short term decisions which the Scottish Government seems unlikely to take even with easy access to that oil and gas just off its shores. And it’s clear that nuclear power is also going to be a key part of the rest of the UK’s future energy supply. Can Scotland really have energy security and deliver lower bills without it?

And as the Russian military threat remains, and the likes of Sweden and Finland see it as so serious they’ve applied to join NATO, is being non-nuclear sustainable or even a vote winner? Polls show that most Scots want to keep Trident and while the SNP argue that only three NATO members have nuclear weapons, unlike the others, some of those weapons are already in Scottish waters.

All of this may not detract from what the FM will have felt was a worthwhile trip. And even if opposition politicians portrayed it as an unnecessary diversion while there are number of serious domestic issues, such as the rail dispute, it’s unlikely to shift public opinion against her and her party.

For the FM, however, this was also a chance to regain some momentum at home with her own supporters while sending a not so subtle message about the role a future independent Scotland might play in the world. But if the prospect of a new Scottish vote – and a win for Yes – becomes more likely than not and there’s continued conflict in Europe, her next visit to the States may be a little trickier. 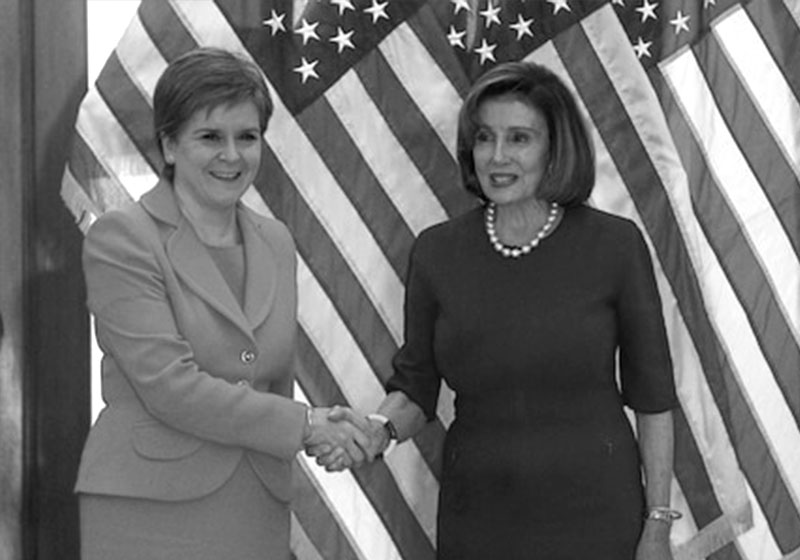